Our Blog
Being a STEM Ambassador - Megan Smyth
September 2019

Did you know that W5 coordinates the STEM Ambassador Hub in Northern Ireland? We manage a database of over 1,300 professionals with STEM skills who have volunteered to promote science, technology, engineering and maths in local schools.

The STEM Ambassador Programme is a UK-wide initiative and free of charge service to schools and youth groups, which aims to encourage young people to have an interest in studying and following a career in STEM subjects. STEM Ambassadors not only have the opportunity to enrich and enhance the learning experience for young people, but individuals who volunteer as STEM Ambassadors can also develop new skills and gain increased work satisfaction.

Megan Smyth is just one of our fantastic volunteers on the STEM Ambassador Programme. We caught up with Megan to find out about her own experience as a STEM Ambassador.

"I graduated from Queen’s University Belfast in 2012 with a 1st Class Hons in Chemistry (MSci) before returning to obtain my PhD in Chemistry in 2016. After graduation I joined Almac Sciences as a Chemist within our Biocatalysis team. Currently I am responsible for leading the implementation of continuous flow chemistry at Almac which is regarded as one of the most innovative, exciting new technologies within the pharmaceutical industry."

"My Grandmother’s cousin was the astronaut James Benson Irwin. He served as Lunar Module Pilot for Apollo 15 and was the 8th person to walk on the moon."

Why did you become a STEM Ambassador?

"After leaving school I had the opportunity to visit Almac Sciences on work experience. The people I met and spent time with greatly inspired and impacted the direction my career took. The continued mentoring and support I received from Almac during both my undergraduate and PhD meant they were my first port of call upon graduating. As a STEM Ambassador I am in the fortunate position where I too can hopefully inspire the next generation of scientists."

What is your favourite thing about being an Ambassador?

"There are a large number of people who don’t realise what occurs every day right here on their doorstep! As an Ambassador I get the opportunity to passionately showcase the exceptional, innovative and truly world class advancements in science developed within Almac."

What does STEM mean to you?

"STEM means a world of opportunities! Studying these subjects opens doors to a multitude of career paths with the prospect of making a real difference in the advancement of human health globally."

Who is your favourite scientist and why?

"Ada Lovelace, who is considered to be the world’s first computer programmer. She was a visionary, and dreamed of possibilities that did not exist until over 100 years later - she predicted computers could do much more than just crunch numbers! In fact, a day is named in her honour to celebrate the achievements of women in STEM subjects."

Our STEM Ambassadors play an essential role in inspiring and engaging the next generation of scientists, technicians, engineers, mathematicians and technologists. If you would like to register as a STEM Ambassador or find out more about the programme click here 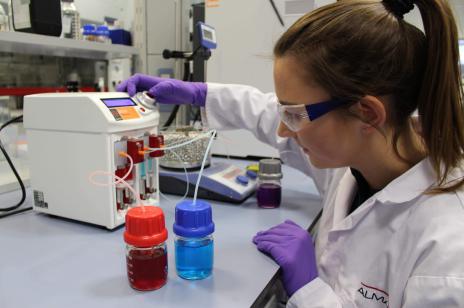