The Friendship Four is the first and only NCAA Division I Hockey Tournament to be held outside of the United States and helps to build links between Belfast and Boston through the medium of Sport. Last weekend saw four American ice hockey teams, Northeastern, Princeton, Colgate, and the University of New Hampshire participate in the impressive tournament at the SSE Arena, Belfast and compete for the coveted Belpot Trophy.

The key focus of the Friendship Four is Education, ensuring that young people and communities from all areas are engaged with education and provided with opportunities to identify relevant areas of study and future potential career paths.

In celebration of the unique sporting event, W5 developed ‘Microsoft Science and Discovery Month’ a varied program of events and experiential learning for both schools and the public over the month of November, aiming to raise awareness of the role of STEM in Sport and in our society. On Friday 29 November, the final ‘Microsoft Science and Discovery Month’ event took place at W5, ‘Digital Innovation: Smart Cities and Future-Proofing Our Workforce.’

As part of the closing event, W5 welcomed Mayor Walsh and panel participants including Tom Gray from Kainos, Rachel Steenson from Esri Ireland, Kieran McCorry from Microsoft Ireland and James Noakes from Belfast City Council to discuss the role of digital innovation in developing cities such as Belfast.

The audience, which included local industry leaders, U.S. Consul General to Northern Ireland and members of the Boston Irish Business Association Trade Delegation enjoyed an engaging panel discussion and keynote address from Mayor Walsh as he spoke about making Boston a leader in innovation equity. In speaking about future-proofing our workforce, Mayor Walsh highlighted the importance in “investing in our young people”.

Following the thought-provoking event, Mayor Walsh was then invited to ‘drop the puck’ with Deputy Lord Mayor of Belfast, Peter McReynolds to start the first Friendship Four Tournament - Northeastern versus University of New Hampshire. 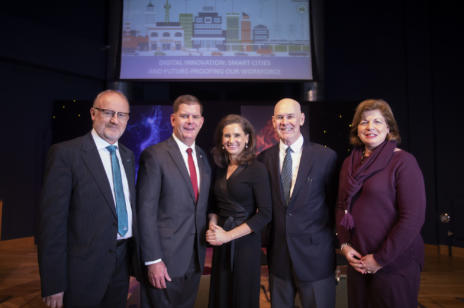 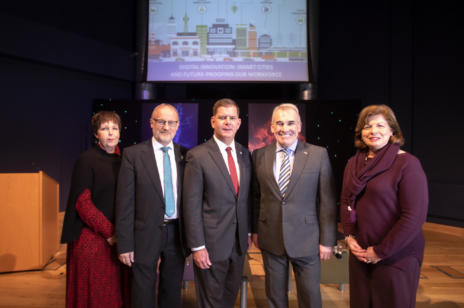