Following a successful first year, Europe’s leading action sports show The Arenacross Tour, once again delivered ‘Arenacross For Schools’ to hundreds of school children ahead of the opening rounds at The SSE Arena, Belfast on January 17th and 18th with Jonathan Rea, five time World Superbike Champion supporting the initiative.

The unique field trip is linked to project partners STEM (science, technology, engineering and mathematics) which works to educate young people and give insight into alternative career opportunities. The 200 plus students witnessed exclusive behind the scene tours and talks from the makers of the AX Tour. During the day, the Fix Auto UK Freestyle Motocross Team gave a private show featuring flips, whips and a taster of the tricks they will performing this weekend.

Thousands of tons of dirt were being delivered into The SSE Arena, Belfast in readiness for the construction and production crew to turn the home of Belfast Giants into a dirt playground. As part of the experience, riders and supporters of the AX Tour, namely Jonathan Rea who attended last year, were there to give expert advice on what it takes to make it in the sporting world as well as an insight into his successful career. He was joined by multiple national Motocross Champion Graeme Irwin, Etec Apico CCM Racing’s Stuart Edmonds as well as youth hero’s Charley Irwin and Lewis Spratt. Amongst the riders will be the 65cc rider Jordan Kinsella, his school St. Cillian’s will be attending, a proud moment for the 38-pupil school.

To top it off, the youngsters were invited to sit ringside and enjoy the opening round of the 2020 Arenacross Tour at The SSE Arena, Belfast this weekend.

Arenacross Tour tickets are still available via www.ssearenabelfast.com. Arena doors will open at 6pm, with the opening ceremony getting underway at 7.30pm.

The 2020 Arenacross Tour dates are;

Click here for 2020 Tour information and to buy tickets. 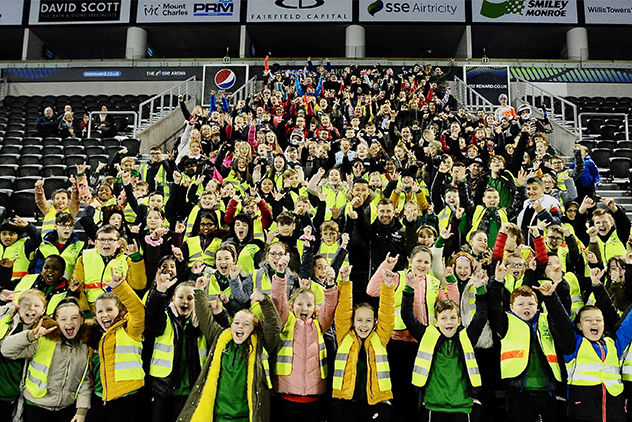